Since last I wrote I have mostly been feeling guilty about not writing. I’ve got at least a million and one half written posts kicking about in draft form, and another three squillion notes to try and make sense of but when it came down to it my head was too busy being empty, and I was too busy being busy and every post I tried to write turned in to yet another post that simply wasn’t meant to be….. I’m not sure I’ve got too much to say yet but I’m going to give it a go anyway….

Believe it or not it’s been four whole weeks since the big move. Surbiton is no more, living by myself is no more, my lovely little flat is no more, and WeeGee’s old life is pretty much no more. To be honest I think it took a little while for the enormity of things to start to sink in. There was so much to do – leading up to the move, during the move, and after the move – that my poor old broken brain didn’t have so much as a minute to figure out what the hell was hitting it. I think it would be fair to say that the last week or so has been quiet, hidey, and thoughtful because when so much hits your brain all at once it’s hardly surprising that you need a bit of quiet, hidey and thoughtful time to make sense of it all.

Things have changed in my life and even although I am one hundred percent sure that the changes have been for the better I still felt like I needed to recalibrate to how things are now. Changes rarely happen over night and where I am right now has been a very long time coming. I had to get better, I had to get to know myself and I had to find the courage to let other people know me too. I had to be brave enough to make some BIG decisions and strong enough to stand by them. I had to leap and wait to see if the net was going to appear. Thankfully it did but now I feel like I need to step back and take a few deep breaths.

A while ago I wrote about how everything in my life was up for grabs – where I lived, who I lived with, how I lived, and how I went about making that living. It seemed bonkers at the time because I liked where I lived, and who I lived with* and how I lived and how I made my living. As for now – well, it’s all changed and I definitely like it a whole lot better now. As for what next – it’s time for a new routine, and different plans and most of all it’s about my future. I don’t know what it’s going to be like but for the first time in a very long time I’m looking forward to every single minute of it…..

Meanwhile in other news I would like to report that Mr Awesome Thing Number Five does indeed have a number of annoying habits that I’m doing my very best to learn to live with.

Nothing else to report today save that it’s okay, because I know I have just as many, if not more, annoying habits than him. 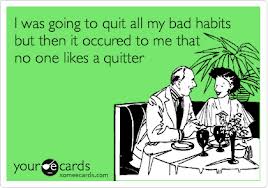 *Which was myself and my cat. What else does a WeeGee need?!