I thought we’d do a quick hair status report before we get started:

Haircut: A smidge off Natalie Portman, circa V for Vendetta.

Eyebrows: Half a dozen each side, multiplying slowly.

Since last I wrote I have mostly been thinking about 4×4 Porsches. Specifically, I’ve been busy trying to figure out whether people buy Porsche 4x4s because they want a Porsche, or because they want a fancy 4×4. I mean if you’re in a position to be buying ANY fancy 4×4 of your choice you’re going to want a customised Range Rover, aren’t you? And if what you want is a Porsche then surely you’re going to want something a little bit flashy. Showy, even, no? All I’m saying is I don’t know what’s going on in peoples’ heads when they buy Porsche 4x4s. And that’s all I’ve got to say about that. As an aside, I suppose now might be a good time to mention I’m starting to get a bit bored of my sick leave…..

How have you all been anyway? All is well here in WeeGee land. Or at least as well as can be expected when you’re six months into five months worth of chemotherapy. Still, yesterday was chemo number 15 out of 16, which means there’s one more to go! I’m looking forward to being able to tick something off the list at last, but I’m tired and I’m keen not to get ahead of myself. My active treatment won’t finish until at least the end of the year and that means there’s still a long way to go. In my case, the chemotherapy isn’t even the primary treatment – it’s neoadjuvant, literally meaning before the main treatment. My main treatment will be the surgery, and it won’t be until that’s done that we know what we have been and are up against.

Of course, I’m glad I’m nearly at the end of chemotherapy, but I’m only glad in a small way. It’s that thing about not counting your chickens, I guess….

Oddly enough, six months ago today, I was busy having my first chemotherapy session – it feels like a lifetime ago. It was Christmas Eve, and while I don’t exactly know what the opposite of festive is, I think it’s safe to say that’s pretty much what I felt as I walked into the Osborne Building, past the jolly holly Christmas tree in the foyer, and  up to the chemotherapy suite for the first time.

I’m still not entirely sure how I got myself to that first appointment because every single fibre of my being was SCREAMING at me not to go. I was still at the ‘this isn’t really happening’ phase, still more than half convinced that somebody had made a terrible mistake somewhere along the line and still wondering why, if I didn’t feel ill, I had to have the treatment at all. In the end, I suppose I  got myself through that day in the same way as I’ve got myself through pretty much everything – by putting one foot in front of the other until I didn’t need to anymore.

Six months is a long time to do anything for. After six months, the thing will have smashed a path into your life, established a new set of routines, and settled in for the long haul. After six months it isn’t even a new thing anymore, it’s just a way of life. After six months, that thing that you didn’t want to do with all of your might, is just a standard flavour of normal. After six months you find yourself somehow attached to the thing – to the tedious, repetitive nature of it all, to the cotton wool you’ve been wrapped in, to the rhythms and routines.

All of this is really just to say that I’m still feeling a bit reflective as I near the end of the chemo. Either that, or it’s Stockholm Syndrome….

As I near the end of chemo, a couple of people have asked me if I’ll be ringing the bell and the short answer to that is no, for a couple of different reasons.

The end of treatment bell is a relatively new concept here in the UK, brought back to Manchester via Oklahoma for a little girl called Emma, who was treated for soft tissue sarcoma back in 2013. Over time, the bells spread out of children’s wards and into adult hospitals and they are now fairly common up and down the UK. The hospital I’m being treated at has an end of treatment bell in the chemo suite, radiotherapy unit, and out-patient clinic. 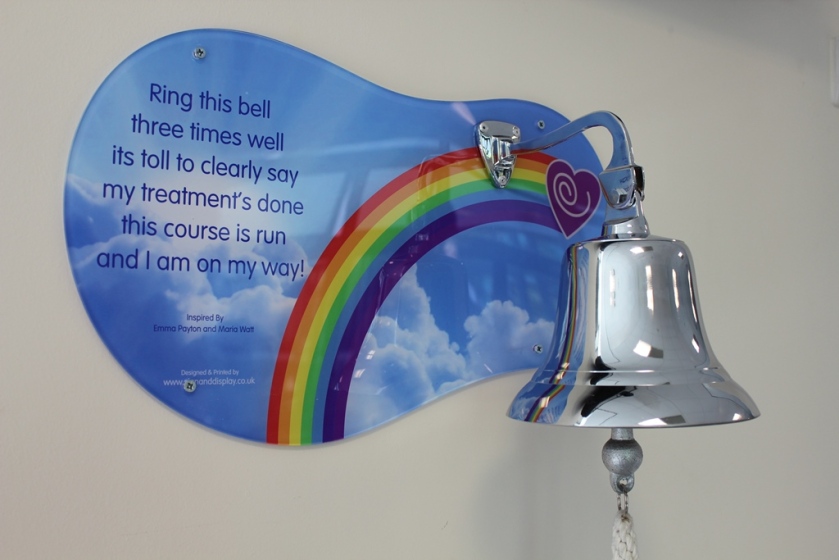 For my own part and for what it’s worth, my feeling is that there is perhaps an argument for moving the end of treatment bells away from main treatment areas, but I see less merit in the case for removing them altogether. In the past six months, I have seen countless people ringing the bell in the chemo suite during my treatment, and do you know what? I’ve never seen smiles like it. It always seems to me like a tiny moment of pure joy at the end of a thousand dark days and I can’t make a case for taking that away from those who want it.

As for my own decision not to ring the bell at the end of the next treatment, there are two factors. The first is that for me, the end of chemo doesn’t really mark the end of anything in the true sense of the word. There is, as I keep saying, still a long way to go and I’m not in the business of tempting fate right now. The second is that I’m not exactly mad keen on being the centre of attention at the best of times and ringing a great big bell so everybody turns to stare at me standing there ringing a bell like a giant plum is my idea of FUCKING NIGHTMARE. So you know, no thank you very much…..

Meanwhile, in other news.

Meanwhile, in other news, it is STILL raining here in Harborough, but the good news is, on the box sets front I’ve rocketed through The Good Fight, Chernobyl, Year and Years, The Good Doctor and Sacred Rivers with Simon Reeve. I’m all out now though, suggestions, please?

Nothing else to report today so here endeth the blog post. It’s over and out with a song as usual. This one is more than 20 years old, and if you’re struggling to believe that, well I  guess that can only mean you’re as old as I am.